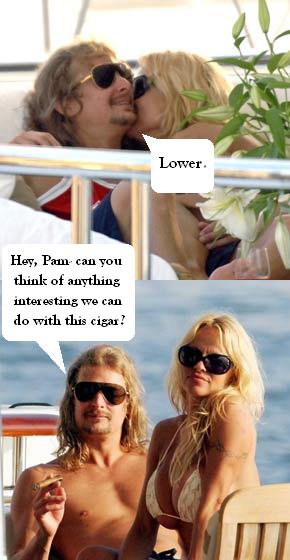 Well, for an on-again, off-again relationship, it looks like Pamela Anderson & Kid Rock are going to tie the knot.

Pam has apparently been quite the romantic lately, as seen in her online diary.Â  Online diary, doesn’t that seem like an oxymoron?Â

â€œIâ€™m in a very romantic mood,â€ Anderson writes July 11 while vacationing off the coast of St. Tropez.”

As it turns out, a July 29 wedding is inÂ store for the fairweathered couple.Â  The wedding is rumoured to be taking place aboard a yacht near St. Tropez.Â  Are we sure this wasn’t some hairbraied idea the two cooked up while they were drunk of PBR?Â Â
Â
According to Pam’s rep,Â she & Kid are ready toÂ be adults & take theÂ marital step.Â â€œTheyâ€™ve been close for a very long time and decided that now is the right time to take the next step.Â  They couldnâ€™t be happier about their future together.â€
Â
Yeah, because they’re probably drunk about half the time.Â  Pamela Anderson being married makes about as much sense as nipples on a shield.Â  But that’s just me….