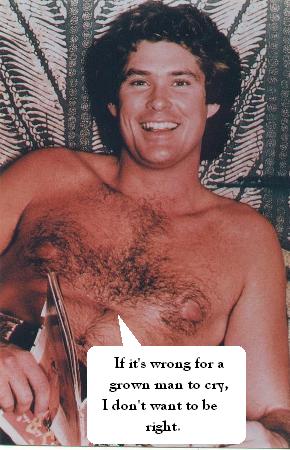 David Hasselhoff was caught crying on camera during the American Idol finale at the end of May.Â  Hasselhoff has endured the scoffing of many a media, but still keeps his head high & even wishes politicians would follow his lead & show some emotion as well.

The former Baywatch star was in the audience whenÂ theÂ American IdolÂ winner was announced, after the fierce Katharine McPhee v.s. Taylor Hicks showdown.Â  The actor was overcome with emotion whenÂ Taylor Hicks took the Idol crown.Â Â Here he is now.Â
Â
“Is it wrong for a grown man to cry? Maybe if we had more emotion in the White House we wouldn’t be in this mess we’re in.

“What moved me was the person sitting next to me is my best friend–he has brain cancer. It was his birthday and this was his present.

“When Taylor Hicks won I said, ‘Isn’t that cool? A guy gets the American Dream.’ Then I look over at my best friend who says, ‘Isn’t it great to be alive?’

Despite having posed nude with Shar Pei puppies, which was so totally strange, Hasselhoff wins points with those comments.