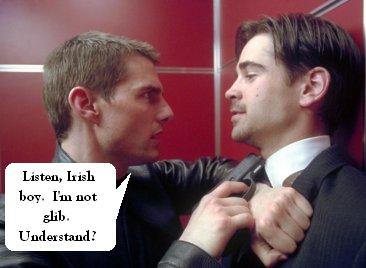 Irish actor Colin is up & about promoting his latest movieÂ Miami Vice & the actor took the opportunity to remind Today host Matt Lauer of his headache interview with Tom Cruise last year.

When Cruise appeared on the Today show in June last year he was promoting War of the Worlds.Â  Lauer debated with Cruise over his zany Scientology beliefs as well as his stance on psychiatry and prescription medication.

During the verbal battle, CruiseÂ hit Lauer with, “You don’t know the history of psychiatry. I do… You’re glib.”

As Lauer was trying to maintain a straight face, Farrell added, “Are you being glib again?”

Just hours later Colin yet again had the Cruise on his mind when he made an appearance on Live with Regis & Kelly.Â  When returning from a commercial break, the cameras find Farrell glad-handling the audience just as Cruise does while doing his lengthy red carpet walks.

OK.Â  I agree whole-heartedly that Tom Cruise lacks a few marbles, but I’m not sure it’s healthy to have him on your mind that much during the day- unless he’s your lover or something.