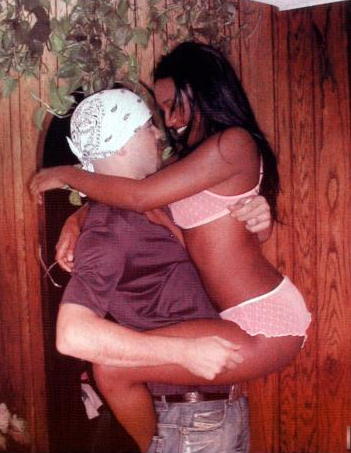 Colin Farrell’s ex-girlfriend, former Playboy Playmate Nicole Narain, will make some big bucks if their 14-minute sex tape goes public.Â  Narain will receive a $3 million advance payment from Internet Commerce Group (ICG) to distribute the film; on top of paying her legal fees, if need be, up to $60,000.

The Irish Phone Booth star is indeed suing Narain and trying to stop the release of the sexy tape that they made three years ago during a brief romance.Â  The suit states that the release of the video would cause irreparable damage to Farrell’s career and reputation.Â  Ummmmm….Â  Does anyone remember Tommy Lee or Pamela Anderson’s careers taking nosedives after their infamous boating adventure?Â  I quite remember the opposite.Â

FarrellÂ is seeking general and compensatory damages as well as a temporary restraining order and injunction prohibiting the sale and exploitation of the videotape. FarrellÂ is just theÂ latest in line of celebrities who have shared their intimate moments with us on camera.Â  When will they ever learn?Â  Film it, enjoy it & burn it has always been my policy.

Reportedly in the tape,Â aÂ video-camera-in-toteÂ Farrell focuses in on Narain’s white cat and comments, “Baby, you have the most beautiful p—y,” that is, according to the New York Post.

Narain, whose physical attributes include a tattoo on her rear and a pierced tongue, displays the latter for the lens. Farrell responds in kind, saying, “I could do this breakfast, lunch and dinner.”Â Â  TheÂ sexyÂ duo then apparently proceed to try out a variety of steamy sexual positions, hopefully without the cat playing along.Â