.
You are here: Home / Mischief & Mayhem / Britney Spears is Cracking Up 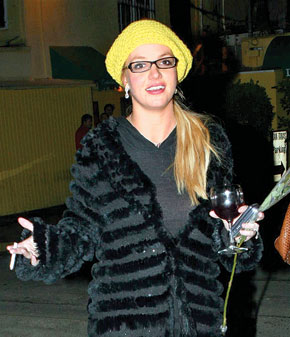 Good ole Britney Spears’ behavior has gone from girls-gone-wild to out-of-control since her break-up with husband Kevin Federline.Â  Wow,Â you would have thought that leaving such a redneck wouldn’t make you then start acting like one.Â  With all those Britney Spears pantyless headlines, we’re all starting to wonder….

While spending the nighttime hanging out with pals the likes of Paris Hilton & Brandon “Greasy Bear” Davis, isn’t such a hot idea for a mom, carrying a glass of wine out of a restaurant probably isn’t the best idea either.Â  And for sure, this is not the best Brittney we have seen, what with those coffee shop eyeglasses, terrible yellow hat & a doobie in her right hand, Spears wasn’t looking so good that night.

All this naughty behavior could make Britnay lose custody of her children, as estranged husband K-Fed is also asking for full custody of Sean Preston & Jayden James.Â

A Federline lawyer rep stated, “Britney is out of control, and Kevin is having a quiet dinner discussing strategy.”

Yep, Brit.Â  You need to get your little ass in gear & have some strategic dinners yourself.

What do you think- Is it really possible that Kevin Federline could win custody over Britney Spears?