.
You are here: Home / Celebrities / Will Cannes Trip Land Lindsay Lohan in Jail? 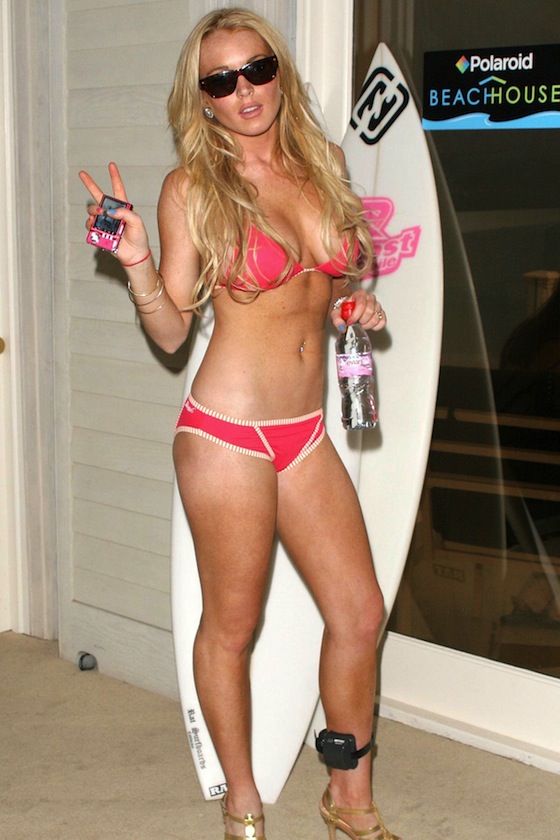 Lindsay Lohan is in a huge pile of doo and not a very good liar. It’s pretty obvious that she’s delusional and wantonly went off to Cannes last week to party, despite that she had an upcoming court hearing (scheduled for 8:30 am PST this morning). Then she found herself a bit stuck in Europe. Next she claimed that her passport was stolen and had to wait for a replacement, meaning she wouldn’t make the court appearance without a private jet. But today is another day and she’s in even more trouble.

First, the French police say she never reported the passport stolen, despite what her lawyer said at this morning’s LA court hearing — you know, the one Lindsay missed. Next, the U.S. Embassy in Marseille, France says she never applied for a new passport, though she did fax over a copy (I assume she already had a copy of the original). Which means if she really did lose her passport, she’s stuck there even longer. Then she apparently sent an email to friends and family begging for help in getting a private plane back to LA. Here’s the text of the email:

I need my friends, and people I work with to PLEASE help me get on a private plane tomorrow by at least 5pm. This is such a horrible thing that’s happened to me and extremely unfortunate. My passports been stolen and the day before my court hearing. I would never ask such a thing, but if there’s anything that I could ever ask of anyone, it would be to help me with this. I must get back on a jet to LA tomorrow. If anyone has planes leaving Nice/Cannes at any time after 11am when I get my passport, please, please, let me know if you can help me. God bless All my love Thank you, Lindsay Lohan [Radar Online]

Unfortunately, LiLo didn’t get a replacement yet for her passport. Oh and by the way, it’s her dad Michael’s fault for the passport being stolen. Why? To ensure she goes to jail and he takes over her finances? As for the missed court hearing today, the prosecuting D.A. wants to see proof that LiLo had bought a plane ticket, which would show her intent to return on time for the missed court appearance. But whether LiLo’s lying or not, Judge Marsha Revel has actually issued an arrest warrant and set bail at $100,000.

To stay out of jail, at least until the next hearing, she can’t drink alcohol, has to submit random drug testing weekly, and has to wear a SCRAM bracelet, which straps around the ankle and monitors any alcohol intake. You know, like the one she wore in 2007 (in the pic above) but which she had removed? (Cue foreboding music here.)

LiLo supposedly partied until 5 am on a yacht, and is on some French party guest lists for tonight, but is expected to return to LA for Friday. (Her mother has recently said that reports of her partying, in general, are false.) U.S. Customs is planning to stop her when she arrives at LAX, then likely turned over to airport police or the LAPD.