Katherine Heigl is rallying for man’s best friend by hating their balls! Yep! One too many balls for this actress who believes they are just “terrible terrible testicles.”

Heigl is the face to a new public service announcement aimed at informing and educating people on the importance of neutering and spaying pets.  The new PSA campaign gives quite the humorous bite and not your usual take on a rather serious problem affecting the lives of many furry creatures whom we’ve come to love.

IHateBalls.com is the newly launched site that has the 33 year old actress campaigning for raising awareness in her cause to spay and neuter pets to save lives. She is shown in a photo wearing  nothing but panties and holding up an adorable doggie covering her two puppies.  This is how she’s been devoting her time to raise funds for the Jason Debus Heigl Foundation. Her own tribute in loving memory of  her brother Jason Debus Heigl, who sadly passed away at the young age of 15 yrs old.

The site features IHateBalls merchandise , proceeds of which will go her brother’s  foundation.

We’re guessing by the likes of her recent statement  “Unfortunately I can’t cut the nuts off human men — yet,” she seems pretty darn serious on downsizing dogs and dawgs. And so let’s all  repeat after her, “  Hate balls, fix pets, save lives. It’s just that simple, 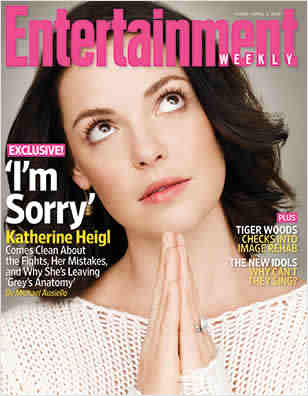 I’m still getting used to her new brunette look, so I had to look twice before I realized that it’s Katherine Heigl on Entertainment Weekly’s recent issue.

Spoofing an angelic pose, Katherine comes clean about the different issues surrounding her career for the exclusive story with EW. The cover blurb reads, “I’m sorry; Katherine Heigl comes clean about her fights, her mistakes, and why she’s leaving Grey’s Anatomy.”

She has reportedly wrapped up her final shoot for the TV show, and if her drastic change in hair color and cut is any indication, she has moved on to a new chapter in her life.

Did you pick up a copy of this week’s EW?

The 31-year-old actress goes for a big change in her look. She emerged early this week with darker locks as she returned to the Grey’s Anatomy set.

She tried staying incognito as she had lunch with her mom Nancy last week at Figaro in Los Feliz. I wonder if she was hiding her newly colored locks under that fedora.

END_OF_DOCUMENT_TOKEN_TO_BE_REPLACED

We heard that Katherine Heigl was adopting a baby, and it’s not all rumor! She was spotted recently with her new baby from South Korea. They were on the set of a new movie. We’ve got one hot mama here! 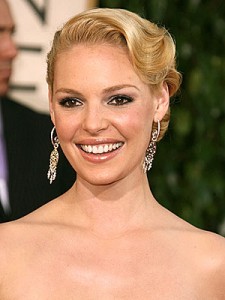 Grey’s Anatomy star Katherine Heigl and her husband Josh Kelley are going to be parents soon – to a 10 month old bay girl. Katherine says that she is done with the idea of having her own children and doesn’t think that it’s necessary to go through “all that.” Their daughter is named Nayleigh, after Katherine’s mom Nancy and sister Leigh.