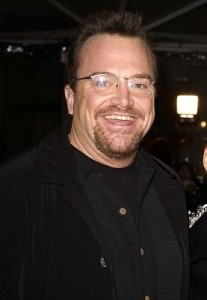 The comedian has something to be thankful for, a couple of days after Thanksgiving. He got married for the fourth time, the setting being Hawaii. The new wife is Ashley Groussman. Best wishes to the couple!

According to Celebitchy, Brandon “Greasy Bear” Davis is quite an act.Â  Apparently Brandon’s mom called up a pal, Tom Arnold, when she thought her dear boy was in a spot of trouble at a Beverly Hills hotel.Â  I guess they thought Davis was locked in his room & couldn’t figure out how to unlock the door?

Tom rushed over to the hotel, wielding a baseball bat, to assist Paris Hilton’s BFF in his time of need; only a scared young woman in the room alone.Â  How odd.Â  Here’s the scoop from none other than your favorite Enquirer:

“Wielding a baseball bat, Tom Arnold rushed to the rescue of bad boy Brandon Davis – after the billionaire heirâ€™s worried mom begged Tom to save her troubled son.

[He] stormed into the ritzy Beverly Hills Hotel lobby on Jan 9, waving a bat and demanding: â€œWhereâ€™s Brandon Davisâ€™ room?â€¦â€

His mom, socialite Nancy Davis, and Arnold are close pals – and she asked Arnold to rescue Brandon when she thought he was at the hotel with some rough companions.

â€œTom charged into the hotel and told security heâ€™d received a call that Brandon, who has a history of drug problems, was â€˜pretty messed up and was with multiple guys who could be dangerousâ€™ in a room there,â€ said a source.

â€œSecurity ran up to the room with Tom, expecting a big showdown. But by the time they got there, all they found was a frightened young girl.â€”

What a funny tale.Â  Now if it was only true, then we would really have something.

You tell me- Do you believe what the National Enquirer prints?