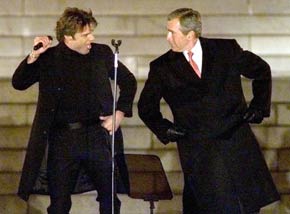 During a recent performance in Puerto Rico MartinÂ gave a gesture when he sang his popular song “Asignatura Pendiente.”

In the song there is a line in the lyrics that goes a little something like this, “A photo with Bush….”Â  During this particular line Martin have the crowd of 18,000 fans a show of his middle finger.

What do you think of little Ricky now?