.
You are here: Home / Career Moves / The Dixie Chicks to Split Up After Grammys 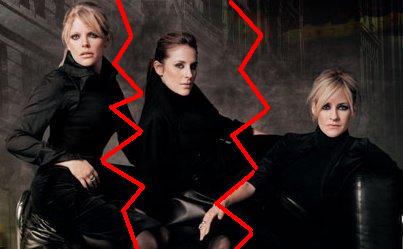 The loved & hated by some Dixie Chicks are planning to split up & go their separate ways after the Grammy Awards in February.Â  Chin up, guys, we’ll make it through this one together, eh?

Emily Robison, Martie Maguire &Â Natalie Maines are finally going to break up the band after all the turmoil they have been through with their political stances & views.Â  According to Star magazine, the split has more to do with family than just your ordinary accumulation of death threats & such.Â  Here’s the scoop:

The controversial country superstars have secretly decided to split up after the Grammy Awards – because Emily Robison and Martie Maguire no longer want to share the nest with outspoken Natalie Maines, say sources.

â€œThe Chicks are tired and wrung out,â€ said a group insider. â€œThey feel theyâ€™ve come to the end, and they want a break from each other to spend more time with their families.â€

The three women, who have seven children among them, are at odds over Natalieâ€™s blunt political ramblings. And while sources say sisters Emily and Martie share many of Natalieâ€™s anti-George W. Bush views, they feel her public rants have taken the focus off their music.

â€œTheyâ€™ve supported many of her political beliefs, even though itâ€™s put their lives and the lives of their families in jeopardy,â€ said the insider.

â€œTheyâ€™ve received death threats, and itâ€™s made them all nervous wrecks.â€

You know, it’s justÂ too damn bad.Â  The Dixie Chicks have been making sweet music together since 1989.Â  Maybe this is just a threat of some kind, we’ll just have to wait for those mid-February Grammys I guess.Â