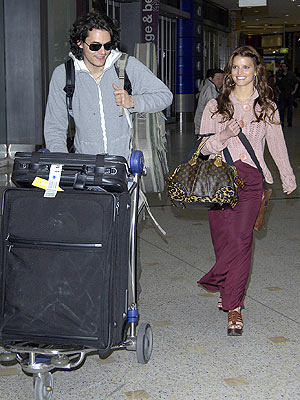 Now public lovebirds Jessica Simpson & John Mayer seem to be showing up just about everywhere these days in front of a camera.

On Saturday Simpson & Mayer were seen arriving in Australia where Mayer will be touring for almost two weeks.Â  It looks like these two can’t get enough of each other.Â  I wonder what the once single man Mayer thinks of having a traveling companion/girlfriend tagging along for the tours?

Ever since theÂ semi-new lovebirdsÂ arrived into Rome, Italy onÂ Thursday morning,Â 26-year-oldÂ Jessica Simpson & 29-year-old John Mayer have been making the most of their time on the Eternal City.

In hilarious JessicaÂ Simpson style, the actress didn’t packÂ light to join her beau onÂ the European leg of his Continuum tour.Â  Upon arrival to Rome’s airport, porters had to lug more than five heavy suitcases into the back of a chauffeur-driven vehicle.

This has not been the first trip to Italy for Jess, as she & former husband Nick Lachey visited Tuscany in a last-ditch effort to save their marriage, they announced their official split a month later.Â  I guess Italy doesn’t heal all wounds, eh?

Apparently though, the trip hasn’t reminded the starlet of any bad memories, Simpson & Mayer have been all smiles during their Roman holiday.Â  The couple seemed to be enjoy themselves, and all their damn bags as well, when they check into their $2,000-a-night suite at Hotel De Russie, which is where you stay in Rome if you’re either a celeb or royalty, which is basically the same anyway.

After spending about two hours settling into their accommodations, probably took that long to lug all their suitcases up to their suite I would imagine, Jess & John dined atÂ a Tom Cruise favorite for lunch, Dal Bolognese.

The duo were spotted spending more than two hours enjoying pasta & salad as they took some time looking over guide books.Â

â€œThey were smiling and laughing and just having a good time.Â  There was also a lot of hand holding going on,” an insider reveals.

After a long lunch Simpson & Mayer did some window shopping along the infamous Via del Corso where the couple stopped into Fendi & reportedly made several purchases.Â  Guess Jess is going to have to buy a new suitcase….

On the way back to the hotel that evening, in a scene right out of a Hollywood romantic comedy, Jess took a spill in the cobbled streets, but was able to get back up, laughing along the way.

Wow, now that’s how you should see Rome.Â  With a laughing Jessica Simpson, falling all over herself, and with more luggage than you know what to do with. 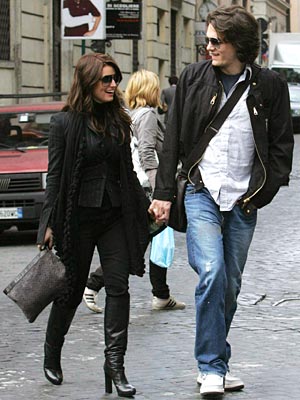 The couple were spotted Thursday enjoying some hand-holding in Italy’s capital, Rome.Â  Simpson & Mayer arrived earlier that day & appear to be enjoying themselves on Mayer’s European wrap-up of his Continuum tour.Â

I wonder how long this pairing can last.Â  Four months?Â Â A year?Â  I’m betting on at least a year, until Mayer gets sick of Simpson’s blonde ambitions & he takes up with a groupie.Â  What about you, what do you think? 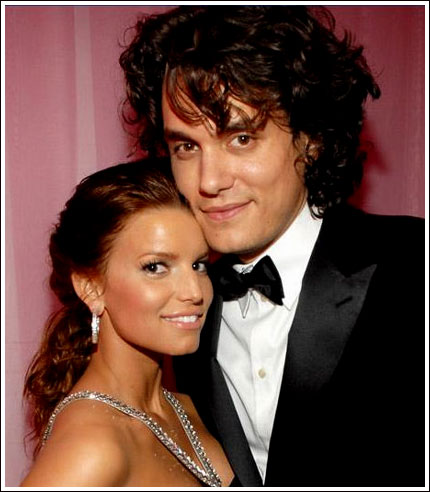 My goodness!Â  29-year-old John Mayer & 26-year-oldÂ Jessica Simpson do look lovely together, but inÂ more of a ‘we work damn hard for this hair’ type way than a normal cute couple way.Â  You know what I mean?Â

Mayer & Jessica were spotted in this hairy embrace at the SonyÂ BMG party at the Beverly Hills Hotel.Â  They are certainly out of the closet, now aren’t they?Â  I just wonder how long they’re gonna last….

Thanks to Us Weekly for the image. 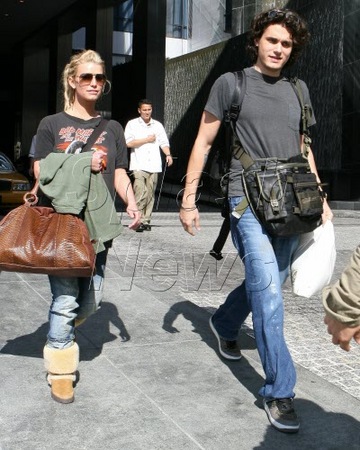