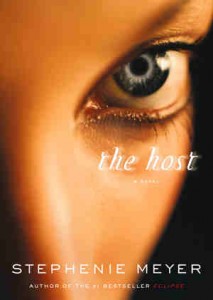 In case you didn’t know, the famous Twilight novelist has written a book outside of the cult vampire series. After the success of the Twilight saga, Stephenie Meyer wrote a science fiction book called The Host, and it isn’t about bloodsuckers and werewolves.

Released in 2008, The Host actually did well in sales, though not as phenomenal as the Twilight series.

Unfortunately, I am not a fan of Stephenie Meyer’s superfluous and adjective-bombarded writing, especially after seeing unedited chapters of her books leaked online. No, I did not bother picking up The Host. Similar to Invasion of The Body Snatchers, Meyer’s story is about aliens that have taken over the minds and bodies of humans, with an injection of love themes to tickle your fancy.

Please don’t kill me, Twi-hard fans. I did appreciate the storyline of the Twilight series. I did swoon over Jacob Black. I’m just not fond of her writing style, that’s all.

Back to The Host. They decided to make a movie version of the book, and Gattaca writer/director Andrew Niccol is taking the lead. Who do you think should play the lead roles? The casting has yet to begin, so your guess is as good as mine. According to reports, if everything goes according to plan, they will start filming in 2011.

Do you think the movie version of The Host will be as big as the Twilight series?