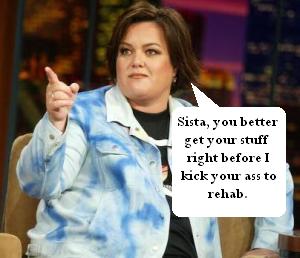 Rosie says, “(Lindsay’s behavior on her latest film Georgia Rule) was unacceptable. It’s not like she was doing Dumb & Dumber 2.

“It’s a Jane Fonda movie! Be early! I saw (Lohan) stumbling around a club drunk (once) and her mother was going, ‘She’s all right!’

“I can say this from experience: it’s hard to be famous, and she’s not doing it well at this point.

“But she’ll get into rehab, take care of the eating disorder, and be all better in two years and have a huge comeback.”