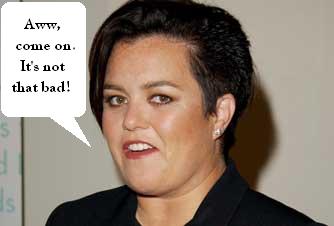 Rosie O’Donnell will be cashing in a $2 million paycheck as the new co-host of The View, but only if she doesn’t do it upÂ butch-style.Â  According to O’Donnell’s ABC contract sheÂ hasÂ been forbiddenÂ to cut her hair.Â  Â

Is this some kind of SikhÂ movement?Â  Nope, ABC & Barbara Walters, who created the show, have stipulated thatÂ Rosie mustÂ never return to that horrible cropped look which shocked fans in 2002.Â  They are trying to make Rosie look at fashionable as possible when she sitsÂ down with the likes of Joy Behar, Star Jones &Â Elizabeth Hasselbeck.
Â
Empathetically O’Donnell said, “I don’t blame them. I remember that haircut. The hair will be staying long.”