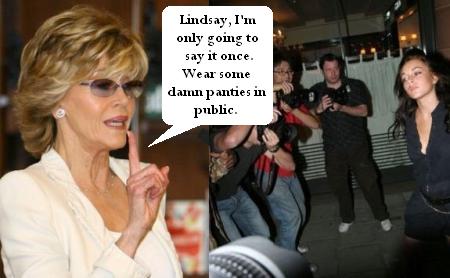 When questioned about her experience working with the teen queen FondaÂ revealed,Â “…Lindsay — who I love dearly — she’s Lindsay Lohan. I just want to take her in my arms and hold her until she’s grown up. She’s so young, so young and she’s so alone out there in the world in terms of structure and people to nurture her.

“She is so talented…oh my gosh she can access emotion like nothing. And she just makes me cry. She made me cry a lot and when she was on the set she was really good, it’s going to be a good movie.”
Â
On Lohan’s well-documented tardiness & partying JaneÂ said, “She parties all the time …you know she’s young and she can get away with it. You know it’s hard after a while to party very hard and work very hard. She’ll learn that.”

“I think every once in a while a very, very young person who is burning both ends of the candle needs to have somebody say, ‘You know your going to pay the piper — you better slow down,’ so I think it was good.”

Fonda’sÂ lastÂ piece of advice for Lohan,Â “I’d want to say to her that this is not a dress rehearsal. This is it. If you blow it, you don’t get a second chance.”

I think Jane’s last nugget of wisdom for Lindsay should have been to wear panties inÂ  public or suffer the firecrotch pubic.