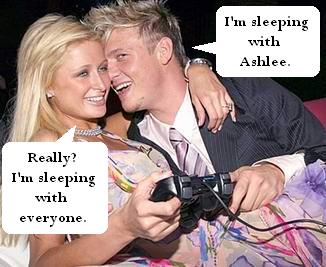 Nick Carter has come outÂ (no, not that kind, as of yet anyway) andÂ revealed that he did indeed cheat on ex-girlfriend ParisÂ Hilton with Ashlee Simpson.Â  But nice Nick said he only cheated after hearing that Hilton had been sleeping with her House of Wax costar Chad Michael Murray.Â  Who, Paris?!Â  Why she would never.Â  Yeah, right.

TheÂ Backstreet Boy dated Paris for eight months before they split in 2004, hilariously the same month that Murray announced hisÂ engagementÂ to the young One Tree Hill costar Sophia Bush.

Carter revealed his skeletons to PageSix,Â “I’d fallen head-over-heels with this chick. Then, all of a sudden, three months go by and I got people telling me, ‘Nick, you know what Paris is doing to you,’ and I got a little upset.

“So then I just decided to fight back a little bit and started doing my own thing again. The result is I hooked up with Ashlee Simpson. When Paris came back from Australia, they talked to each other and she found out about it.

“So I brought it up to her and said, ‘You know what I did, and now it’s your turn. Why don’t you tell me what you did?’ And she goes, ‘I never did anything! I never cheated on you.’

“I had kind of started to really like Ashlee and I was thinking about the dating stage. Then, before you know it, f**king b**ch-face comes back.

“I got so burnt over that whole Paris s**t with all this swinging and switching. Whatever happened to morals and values?”

Yeah, whatever happened to that,Â Nick?Â  It’s not likeÂ you cheated on anyone….Â