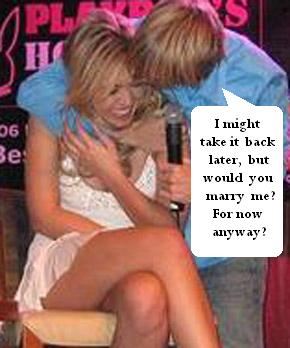 On September 16 onstage in Las Vegas Carter proposed to 22-year-old Peniche, an ex-girlfriend of his older brother Backstreet Boys Nick Carter.Â  It was very sweet and quite romantic, until…..

“I got caught up in the moment and proposed. I then realized it was a hasty thing to do and I am not ready for marriage quite yet,” Carter said, spilling the beans.

A source close to Aaron stated, “They are just going to be friends now. She still wants to keep dating him but Aaron is not quite sure. He was trying to appease her but came to his senses and realized it was the wrong thing to do.”

Wow.Â  Might wanna get your feelings straight before you freekin’ propose to someone!