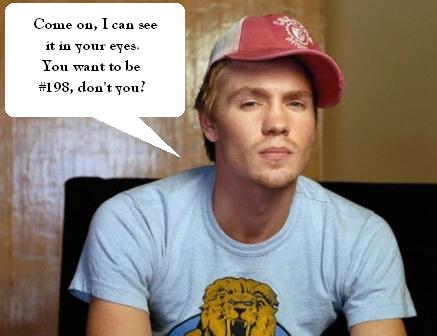 The WB’s One Tree Hill Chad Michael Murray is engaged- again.Â  Just six months after filing an application for a marriage annulment from co-star Sophia Bush, Murray is back in the swing of things with his new fiance Kenzie Dalton.Â  Wow, that must be an uncomfortable set.

The 24-year-oldÂ Chad MichaelÂ Murray and his ex-wife Sophia Bush ended their relationship last September after only six months of marriage bliss amid rumors and reports that he was cheating on the Bush.Â  His application for the marriage to be annulled last month stated “fraud” as the reason behind the breakup.

Since that time Murray has been a busy boy.Â  People reports that Chad has proposed marriage to his new girlfriend, an extra on One Tree Hill, Kenzie Dalton after a long and serious three-month courtship.Â  This will be the first marriage for Dalton at the ripe old age of 18.Â  The couple only went public last month after dating since December- what a long-term relationship this has been- since Dalton was 17 when the couple first became “involved”.

Does anyone else see Murray’s future in this light:Â  At the age of 97 Chad Michael Murray dies an old and happy man.Â  After 197 marriages, he finally found what he had been looking for in Bunky the monkey and they enjoyed a long life together as man and monkeyÂ for about 2 hours before Murray passed.Â  He will beÂ sorely missedÂ by those who loved him, by those who were married to them and by those who wanted to be number 198.