.
You are here: Home / Mischief & Mayhem / Naomi Campbell Fails to Appear for Court 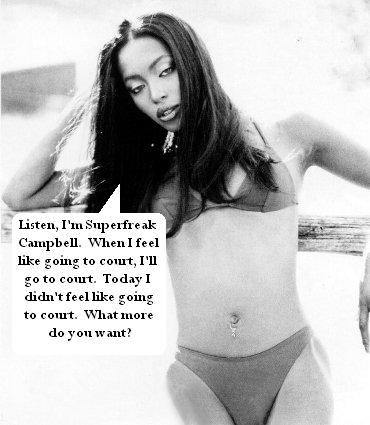 Superfreak Naomi Campbell failed to appear in court today for her hearingÂ at the Manhattan Criminal Court.Â  Campbell has been warned that if she fails to appear inÂ court next month, she faces arrest.Â

Superfreak was to face accusations today that she threw a cellÂ phone atÂ her previous housekeeper’s headÂ back in January.

Campbell’s lawyer David Breitbart claimed he absence was not due to professional reasons, but failed to give any more details.

Judge James Gibbons told the jury, “I want to make it clear that she is absolutely obliged to appear at the next hearing.

“If she fails to appear on that court date, the warrant will go into effect.”