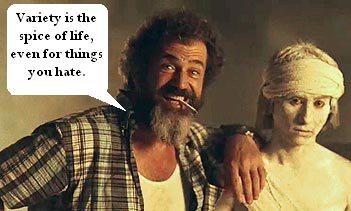 Well, it looks like Jews are not the only thing Mel Gibson hates.Â  Gibson made a surprise public appearanceÂ Friday at the Fantastic Fest in Texas to promote his new film Apocalypto.

During his first public appearance since his drunk driving & Jew hating comments, Gibson slammed the war in Iraq and warned festival goers that the war would be the downfall of the U.S.

Mel stated, “The precursors to a civilization that’s going under are the same, time and time again. What’s human sacrifice if not sending guys off to Iraq for no reason?”

I wonder, what are the precursors of a dead-end career?Â  Why I think it might have something to do getting drunkÂ andÂ slamming Jews.