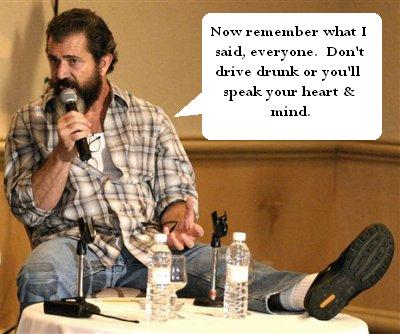 InÂ actÂ II of the Mel Gibson drunk driving saga, Gibson has plead guilty to having a blood-alcohol level ofÂ above the legal .08 limit.Â  Yesterday in a Malibu court, Mel’s lawyers agreed to make a dealÂ with theÂ prosecutors to avoidÂ any jail time for Gibson.

Under the deal’s terms, Gibson will have to attend a full year of Alcoholics Anonymous & pay a fine of $1200.Â  But Mel has even gone a step further &Â said he will marry a Jewish woman to make amends for hisÂ now infamous anti-Semite slander.Â Â No, actually he has volunteered to record a publicÂ service announcement vocalizing the hazards ofÂ driving while drunk.

I think Mel’s recording will go something like this, “Driving whileÂ under the influence of alcohol is never a good idea.Â  For one- you could hit someone & that’s never good.Â  Two- you could wreck your sportscar, and of course, that’s never very good either.Â  But most importantly- you might start spouting off what you really mean about those damn Jews & nothing will ever be the same.Â  So, remember- never drive while drunk ’cause you’re libel to speak your heart.”