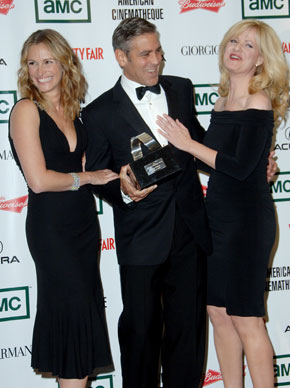 George Clooney is an object of affection?Â  Give me a break, Clooney is the object of desire from Lindsay Lohan’s drooling mother to costar Ellen Barkin, the man is a sexual myth & legend.

Friday night American Cinematheque paidÂ tribute to the 45-year-old actor at the Beverly Hilton hotel and we have a little scoop on what the ladies areÂ saying about theÂ George.
Â
“Yes, I have fâ€” George Clooney. I always heard that George has amazing chemistry with all of his co-stars. Now I see why. â€¦ I’m probably the only one of many actresses to stand up here and admit yes, I have fâ€” George Clooney. I’m very proud of it actually. â€¦ If you don’t have chemistry with George Clooney, you need to check your pulse,” Oceanâ€™s 13 costar Ellen BarkinÂ revealed.Â

Interestingly a rep for Barkin, who isÂ going through a divorce with Revlon billionaireÂ
Ronald Perelman, stated EllenÂ “was just goofing around. It was a roast. She was being funny.”Â  Yep, I’d watch those billions too ifÂ I were you.

“Before I met my husband, you were the best man I ever met. â€¦ You’re cute and funny and you do wacky things with shaving cream and Neosporin.Â I don’t mean that in a sexy way,” Oceans 11 costar Julia Roberts said.
Â
“Girls, he’s the best friend you can have. But he’d make a lousy boyfriend.Â  For a non-Mexican, he makes the best shrimp quesadillas I have had,” From Dusk Till Dawn costarÂ Salma Hayek stated.
Â
And what did the man, the myth say for himself?

“I do have regrets in my life. I regret that Michelle Pfeiffer was married when we did One Fine Day. And that Julia and Catherine Zeta-Jones were married, too. Also Matt Damon, but that’s a different story. I’d like a crack at him.”

A lot of hilarity for one night’s work.Â  I heart the George.