.
You are here: Home / The Red Carpet / The Oscars Overwhelm No One 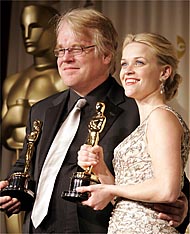 The onlyÂ surprising eventÂ for Oscar night 2006 was Crash receiving the award for Best Motion Picture over the highly anticipatedÂ nomineeÂ Brokeback MountainÂ as well as the fact that I made it to the toilet to puke and I didn’t fall asleep this year.Â  Â

Here’s a little breakdown of the highlights:

For a more detailed and full account of the winners and nominees, please see http://www.oscars.org/78academyawards/nomswins.html.

John Stewart was a welcome and refreshing host of the annual event, although I’m still left pondering why he accepted this role.Â  In a very Daily Show approach, he broke the endless movie montages (did anyone else want to go to sleep?) with campy advertisements for the nominees.Â  In one advertisement the scene is set by an elderly, white married couple sitting at the kitchen table discussing the fact that Best Actress should be awarded to a nominee with an American name like Reese Witherspoon, not by the likes of folks named Felcity, Keira or Charlize.Â  Pretty cute stuff and it looks like the faux advertisement paid off for Witherspoon.

I almost didn’t make it to the bathroom with my projectileÂ vomit after hearing Reese Witherspoon’s acceptance speech.Â  “I’m just trying to matter, and live a good life.”Â  It’s almost too sweet, but then you realize you are not only listening to the star of Legally Blonde, but also Legally Blonde II.Â  But Reese will cut you, so I better watch what I say.

And speaking of which, did anyone happen to catch that John Stewart scientology joke?Â  I can just see Tom Cruise now looking around the audience to see who laughed and adding those names to his ‘I’m going to get you, sucker’ little black book.

Lesson to be learned from the 78th annual Academy Awards:Â  Go to the movies, dammit and leave the DVD’s for uncaring, insensitive, cheap and lack-of-character assholes.