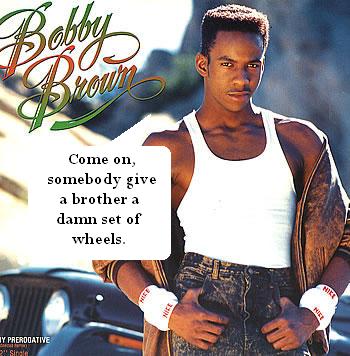 Poor Bobby Brown, heÂ just needs a set of wheels.Â  The former R & B star wasÂ asked to appear on theÂ TV One Reality Series, I Married a Baller.Â Â He response, get me a car and we’ll call it a deal.Â  Wow.Â  Whitney Houston must be doing a number on the boy.Â

The producer of the TV reality series that chronicles the relationships of sports stars stated, “When he asked for a car, we actually thought he meant for us to book him car service.”

“But then I was told that he actually wanted us to buy him a car!”

I think Bobby B was a little embarrassed that the word got out about his lack of wheels, and passed on doing the show.Â  Brown’s lawyer even made a statement saying that Bobby was just joking about the whole silly car thing.Â  Whatever, Bobby.Â  You’re not fooling anyone.Â  I think someone should donate a used 1978 Beetle to the poor boy, but it has to be spray-painted with “I’m Bobby Brown & I need some damn wheels” on the side.