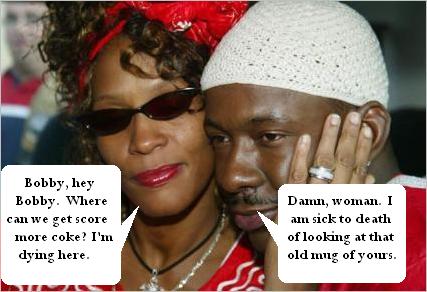 Well, it looks like the end of an era, a bad era, but still an era.Â  Whitney Houston has filedÂ for divorce from hubby Bobby Brown.Â  Houston’s publicist, Nancy Seltzer,Â let the world know the big news just a few short hours ago.

Seltzer refused to reveal where or when Whitney filed the divorce papers and stated that Houston had no statement to make- other than she’s going to miss the drug-ridden beatings she gave Bobby B.

“I can just confirm that she has filed for divorce,” Seltzer stated.

Huston & Brown wed in 1992 and have regretted it ever since.Â  They do have a 13-year-old daughter named Bobbi Kristina.Â  So, when you don’t have a boy to name after yourself, just go with it anyway?