.
You are here: Home / Breakups & Goodbyes / Bobby Brown Getting it On with Karrine Steffans 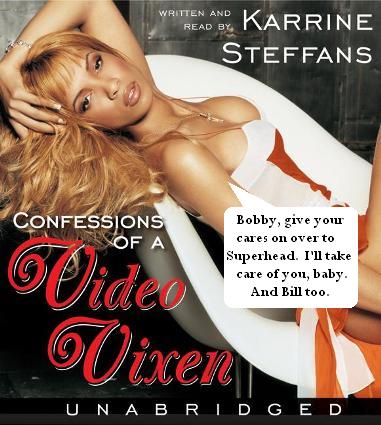 Now that BobbyÂ Brown hasÂ been served divorce papers by soon to be ex-wife Whitney Houston, he is living it up withÂ Karrine Steffans.Â  You may have heard ofÂ Steffans before, she is the author of the best-selling bookÂ “Confessions of a Video Vixen” as well as being Bill Maher’s on-again-off-again intimate companion (ewwwww!).

According to the New York Daily News, Brown has been staying at Karrine’s love shack since Houston served him with papers earlier this week.

A friend of Brown’s stated, “It’s not like Bobby didn’t see this coming.”

“He and Whitney hadn’t been living together for months.”

Interestingly Steffans has a nickname.Â  I love nicknames, especially the elusive Hollywood kind.Â  KarrineÂ has apparently been dubbedÂ “Superhead” for all the pleasure she has given to her many rich & powerfulÂ men.

According to Steffans,Â she had no part in breaking up Whitney &Â Bobby. Â “I’m not a home-wrecker … I can’t break up a 16-year marriage in a few months. I’m not that super.”

Yeah, I’m not sure we need much more than cocaine, beatings and alcohol to break those two lovebirds up.

Steffans reportedly paid Bobby’s cell phone bill this month & is comfortable in offering up her home (and anything else?) to him.Â  As for Bill…

“Bill and I have discussed Bobby.”

“But Bobby is not an issue in my relationship. I still love Bill. He’s the love of my life. I know you’ll see us back together.”