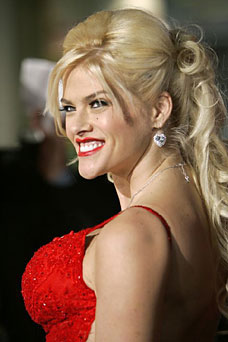 On Monday authorities revealed that the cause of Anna Nicole Smith’s untimely death was accidental.Â  Smith had basically been injecting herself with a veritable variety drug cocktail into her famous bum.

Boward County medical examiner Dr. Joshua Perper ( who I so wish would drop that ‘r’ in his last name) revealed that Smith had nine drugs in her body at the time of her death.Â  Perper ruled the death an accidental overdose.Â  The extensive list of drugs found is listed below.

Wow.Â  I don’t think even Elton John himself has had that many drugs in his system at once.

Why I find odd is that even days before Anna Nicole’s death, she experienced chills, vomiting & her temperature reached 105.Â  Don’t you kinda head for the hospital during these circumstances?Â

According to the Seminole Police Chief, Charlie Tiger, we should just drop the case & accept the results.

“We found nothing to indicate foul play.”

Â “This case is an accidental overdose with no other criminal elements present.”

Â “This effectively closes the case on Anna Nicole Smith.”

Anna Nicole Smith died on February 9, after being found unconscious in her Florida hotel room.Â  She was buried next to her son Daniel, who died in September at the ripe old age of 20,Â in the Bahamas.

Still battling over custody of Anna Nicole’s daughter Dannielynn, Howard K. Stern & Larry Birkhead will soon know who is the new daddy.Â  Photographer Birkhead recently took a paternity test to prove he is the father, leaving Stern to beg that the DNA results not be read at the trial which resumes April 3.

If you ask me, I’m kinda rooting for ZaZa Gabor’s husband…..