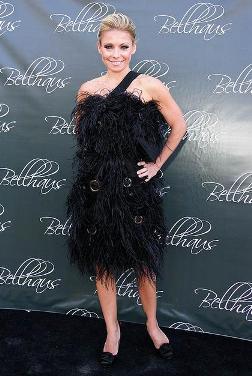 Kelly Rippa’s dress looks like a giant feather duster. At least we know if the Cannes Film Festival’s cleaning crew ever need to lift the flecks off the red carpet, they just have to trip her and kick her in the general direction of the dust bunnies. 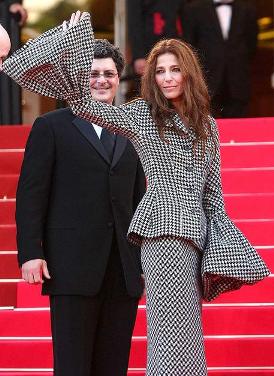 It’s a bird! It’s a plane! No it’s Catherine Keener at Cannes. Good thing her
acting ability is better than her fashion sense.

Angelina Jolina narrowly escaped a serious “wardrobe malfunction”Â  at the premiere of
Beowulf when her skin-tight black leather pants started to split at the seams near the hem. Brad Pitt saved the day by hiding the rip with his palm, and holding it up while the actress continued to smile — as poised as ever — at photographers.

Then the poor woman stepped into a wad of gum. Ah, some days,Â  nothing goes right. 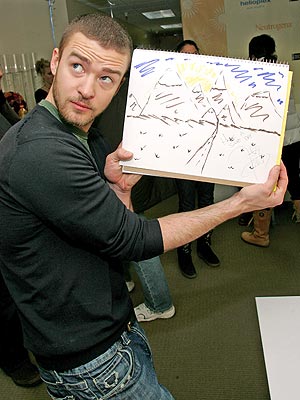 Justin Timberlake is atÂ the Sundance Film Festival this year to promote his new movie Black Snake Moan, and interesting title to say the least, eh?

Timberlake was spotted at a local Park City, Utah giftÂ shop Wednesday showing off his (lack of) artistic talent.Â  My god, I think my five-year-old nephews can draw a better mountain scene than Justin.Â  I think the boy needs to go back through third grade & master the techniques of coloring.

Thanks to PeopleÂ for the image.

Filmmaker Sofia Coppola received many a boos last night when her most recent film, Marie Antoinette, was shown at a press screening at the Cannes Film Festival last night.Â  But the daring moviemakerÂ has kept her head above the sometimes sticky jeering to remain strong and passionate about her work.

CoppolaÂ states, “It’s better to get a reaction, it’s better than a mediocre response.Â  Hopefully some people will enjoy it. I think it’s not for everybody.”Â

Marie Antoinette stars Kirsten Dunst, who also appeared in Coppola’s The Virgin Suicides, & British actor Steve Coogan.Â  Sofia admits she found the Cannes press screening to be “disappointing”, she insists that she always knew the film would provoke debate.Â

Dunst said, “I like the movie and I’m really proud.”

Coogan added, “When you make something that’s personal and specific it’s inevitable that there will be some naysayers, and it’s better to have that than just have a bland uniform response.

“I think it shows that Sofia is true to her voice. I’ve seen the film and it’s consistent with all the qualities that make her films great in the past. People who like Sofia Coppola will love this film. People who don’t won’t but then they’re not really under her radar anyway.”

Marie Antoinette premiers in Cannes this evening.Â  Hopefully the story of itsÂ reception will be less tragic than that ofÂ the French Queen.Â