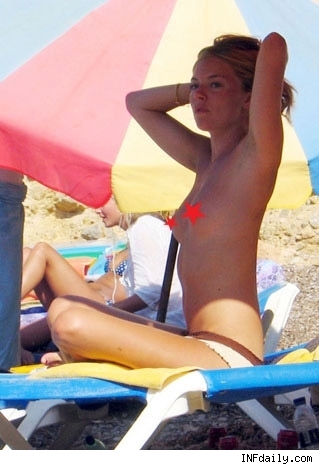 Miller was in the fortunate company of fellow Brit actor Rhys Ifans, who, rumor has it, is in love with the Factory Girl star.

Hrmm, not sure what I think about that match.Â  But maybe it will be a more constructive relationship than with Jude Law….

Miller has recently mentioned that she truly misses being with ex-fiance Jude Law’s children & is quite anxious to start her own crazy family.

Apparently Miller & her new man have been giving the idea some thought, according to an insider anyway.

The source reveals, “Sienna misses the kids of her ex, Jude Law, so much that she says she can’t wait to become a mum herself.

“For now though, it’s all about her acting – but she really can’t wait to have her own children. She and Jamie have been inseparable over the past few weeks. It certainly seems very serious.”

Wowzers!Â  That is one woman you do not want to date!Â  First date & she’s asking you if you’re ready to start a family.Â  Watch out! Now, wouldn’t that be a hot item?Â Â Teen queen Lindsay Lohan &Â British diva Jude Law as a couple,Â what an interestingÂ pairing that one would make!

According to Page Six, before LLÂ heads off to London to shoot her next movie, she wants to make sure she has a pal there first.Â  Lohan & Law were spotted at The Box on The Box on Chrystie Street in the wee hours both Friday & Saturday night.

Apparently Lindsay called Jude after eating with her mom Dina & Jason Preston at Stereo.Â  The duo met at The Box around 1 am.

Saturday evening, Lohan met up with Law at The Box once again, but this time joined by Jude’s own boy toys, Sean Penn & Tim Robbins.Â  What a hilarious group!

“They are adoring one another’s company,” said insider revealed.

But according to LL’s rep, “We don’t comment on our client’s personal life.”Â  Yeah, how about a big, yeah right, on that one!