Sandra Bullock’s decision to adopt a baby didn’t spring from her separation from Jesse James, as many of you have speculated. Turns out she has been broody all this time.

When she was a guest on The Ellen DeGeneres Show in November, she praised people who have decided to adopt. “Just because a child didn’t come from inside your body, doesn’t mean it’s not your child,” Sandra said. “It just arrived [from] somewhere else. The thing that affected me the most profoundly was: When people think of adopting a child—oh I want a brand new little baby—there are so many children that are just dying and waiting to be loved and give you back love a thousand times more than what you can ever give them.”

Sandra and her husband Jesse James began the adoption process about four years ago. They brought home the 3½-month old baby named Louis Bardo in January, but Sandra’s family and close friends decided to keep the adoption under wraps until after the Oscars.

Unfortunately, things didn’t go according to plan. The couple wasn’t able to announce the baby after Sandra’s March 10 Oscar win, because Jesse’s cheating scandals surfaced. The two are now separated, and Sandra is filing for divorce.

The good news is: Sandra has motherhood to look forward to. In a bid to move on from the scandals, Sandra is finalizing the adoption as a single mom.

We wish you all the best, Sandy! 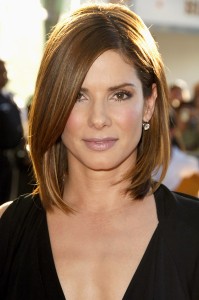 I don’t know what’s worse—Jesse James repeatedly lying and cheating on his wife Sandra Bullock, or one of Jesse’s mistresses writing a letter to Sandra.

TMZ has obtained a copy of the letter that Melissa Smith, Jesse’s mistress #2, faxed to Sandra’s agent on Sunday.

She apologized and wrote, “I felt I needed to reach out to you and tell you how deeply sorry I am for everything that you’ve been through.” Other highlights of the letter include:

“I am sorry for any hurt or pain that I have caused you. My actions of engaging with a married man are unforgivable.”

“I compromised my beliefs on several occasions and as a result will never forgive myself.”

“Please contact me if you wish to discuss on the phone or in person.”

Yes, Melissa, I’m sure Sandra is dying to fax or write you back so you could become penpals and have girly lunches together. 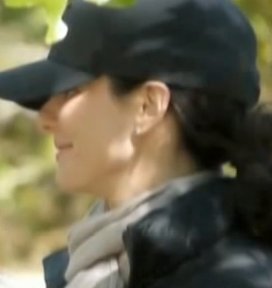 Sandra Bullock has been photographed for the first time since the news of her husband, Jesse James lurid affairs were made public, and it’s not hard to tell the 46 year old has been under a tremendous amount of stress.

UsMagazine acquired the photos (embedded below) and hired a body language expert to to analyze them. Patti Wood says:

“She is gripping the coffee cup very high up,” notes Wood. “That’s what you do when you really want to grab a hold of something and show your power. She’s really making it obvious and playing toward the camera to show that empty finger.”

“She’s chosen a heavily padded jacket and has it zipped up very high,” observes Wood. “The choice of her scarf, which is tied over heart, means that she is hiding her heart window and throat window, which is the communication window.” 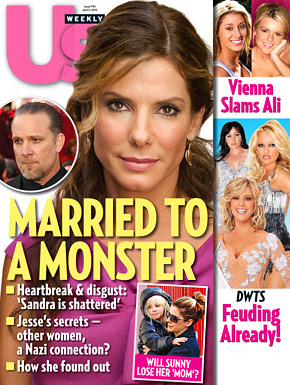 “Married To A Monster”

With a cover blurb like that, who wouldn’t want to read the magazine? This week’s issue of US Weekly tackles the Sandra Bullock-Jesse James issue:

• Heartbreak & disgust: ‘Sandra is shattered’
• Jesse’s secrets: other women, a Nazi connection?
• How she found out

The public interest surrounding Jesse’s reported infidelity and the couple’s separation has a few new twists, according to the magazine. US Weekly cites new sources who claim that Jesse cheated on his wife Sandra with other women besides the much-publicized tattoo model Michelle McGee.

Other stories you might want to read are the reported feuds among Dancing With The Stars contestants and the rift between The Bachelor’s Vienna Girardi and Ali Fedotowski.

Sunday night was probably filed under ‘worst night eva’ for Sandra Bullock & her motorcycle enthusiast hubby Jesse James.Â  Late Sunday evening, a fan of James’ almost killed him after an attack at the couple’s home in Orange County.

Police are revealing that Bullock & James’ 10-year-old child, could only look on as Marcia ValentineÂ “attempted 3 or 4 times to run Jesse James over with her silver Mercedes.”Â  Thankfully, Jesse was never hit by the vehicle.

The copsÂ are also stating that Valentine alsoÂ “laid in the driveway and wouldn’t move.”

The Orange County sheriff’s department responded to the scene, but Valentine had left before they arrived.Â  Shortly after the incident, Marcia was located & is now being held on suspicion of assault with a deadlyÂ weapon, death by Mercedes I assume.

Bullock & James’ repÂ just recently stated,Â “The incident did occur. Both Jesse James and Sandra Bullock are fine and it is now in the hands of the authorities.”

Jeez, talk about a ‘I”m your number one fan’ kinda thing.