Ever since Conan O’Brien started his own Twitter account, the world of tweeting has never been the same.

END_OF_DOCUMENT_TOKEN_TO_BE_REPLACED

What better way to remind the world that you are still alive than to put up a Twitter account. Conan O’Brien is currently “in between jobs,” so he decided to be more productive about his free time by joining Twitter.

END_OF_DOCUMENT_TOKEN_TO_BE_REPLACED 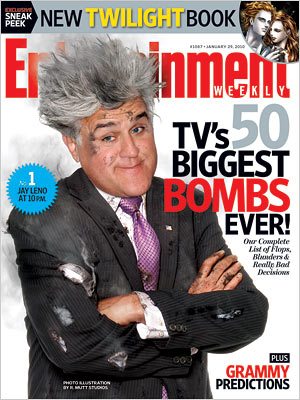 Did you miss Conan O’Brien’s final episode of The Tonight Show last Friday night? Think of it as the crucial NBA game that you missed, and I’m bringing you the highlights.

1. The ratings skyrocketed. Starpulse reported that Conan “scored a 7.0 rating for his farewell appearance on NBC Friday, compared to a 2.5 rating for CBS’ Late Show With David Letterman, and on ABC, a 2.8 for Nightline followed by 1.3 for Jimmy Kimmel Live!”

2. He nearly cried. Nearly! Just when you thought he was great with translating emotions into sarcastic jokes, Conan actually choked back his tears when he addressed his audience and fans.

3. He had stellar guests. Steve Carell gave him an exit interview; Neil Young performed “Long May You Run”; and Tom Hanks led the crowd’s “Coco cheer.”

5. He ended with a song. With Will Ferrell dressed as a hippie, they performed Lynyrd Skynyrd’s “Freebird.”

What did you think of Conan’s last words?

January 18, 2010—Conan O’Brien showed his support for his fans as he ran with the crowd from Lankershim Blvd. to Universal Studios on foot. A large crowd in Studio City gathered to cheer him on. As he reached the top of the building, an “I’m with COCO” poster was hung down from the building with O’Brien raising his arms and cheering on the crowd.

“In the end, Conan was appreciative of the steps NBC made to take care of his staff and crew, and decided to supplement the severance they were getting out of his own pocket,” Gavin Polone, Conan’s manager told The Wall Street Journal.

Watch out for this Friday’s farewell show, with special guests Tom Hanks and Will Ferrell. Funnyman Conan still managed to pull this off as he gave the bittersweet news to the audience: “Hi, I’m Conan O’Brien, and I’m just three days away from the biggest drinking binge in history.”

Who says it’s the end of Conan O’Brien? My gut tells me that the other network executives are busy drafting hefty proposals for the 46-year-old comedian as you read this post.