In joint place for fourth and fifth and in no particular order we have “50 Cent” Curtis Jackson and Brian “Birdman” Williams.

50 Cent was discovered by Eminem and, in conjunction with Dr Dre, quickly became one of the highest grossing hip hop artists. The bulk of his fortune, however, came from the sale of his shares in Vitamin Water. 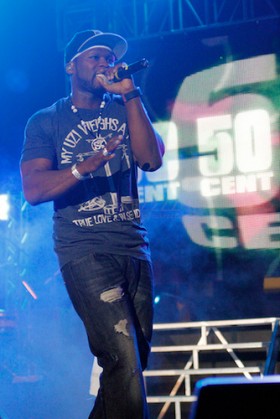 In 2003 50 Cent founded record label G Unit Records. This label is also responsible for artists like Young Buck, Lloyd Banks and Tony Yayo. Adding to 50 Cent’s accomplishments in the music industry, he was noted as the third best rapper of the decade 2000-2009 following Eminem and Nelly. 50 Cent has also stared in numerous movies like Get rich or Die Trying in 2005, Home of the Brave in 2006 and Righteous Kill in 2008.

Brian “Birdman” Williams is the one half of hip hop duo Big Tymers as well as co founder of the record label Cash Money Records. All of this was a spin off from his solo career in the 90’s. Along with his record label, Birdman has also dabbled in oil and gas exploration.

In third place goes to a big name in the industry, “Dr Dre” Andre Young. Dr Dre made his fortune from his solo career at record label Death Row Records. His label is responsible for launching top selling artists like Eminem, Snoop Dogg and 50 Cent. In 1993 Dr Dre launched a solo album “The Chronic” that went on to become one of the biggest selling albums.  In 1996 Dr Dre went on to start his own record label aptly named Aftermath Entertainment. Dr Dre, as with many other hip hop artists, also starred in various movie roles including Set it Off, The Wash and Training Day”.

In second place we have Shawn Corey Carter otherwise known as Jay Z. He is rumoured to be worth an estimated $450 Million. Jay Z is touted as being a shrewd businessman as, along with his rapping, he made his fortune as a club owner as well as through a fashion label and advertising. His accolades in the music industry include sales of more than 50 million records and 13 Grammy awards.

As a businessman, Jay Z is the owner of the 40/40Club, owner of clothing label Rocawear as well as part owner of the New Jersey Nets. He is also the founder of the record label Roc-A-Fella Records and music publishing and entertainment company Roc Nation, which has hit artists Rihanna, Mark Ronson and The Ting Tings as part of their stable.

At number one we have the charismatic Sean “P Diddy” Combs. Diddy, as he is now known, is by all accounts a highly acclaimed musician and businessman with an estimated worth of $475 million. His wealth stems from an accomplished music career that netted him three Grammy awards and two MTV Video Music awards. Diddy is the owner of successful clothing line Sean John Clothing, worldwide record label Bad Boy Records, a movie production company and two restaurants.

These artists bear testament to the fact that hard work and a shrewd business acumen will ensure that the sky is the limit.

Nathan Johnston is an online content writer who enjoys writing about various topics from the supreme comfort of his air conditioned office. Currently he’s researching wedding rings and Engagement rings for content on his latest article.