END_OF_DOCUMENT_TOKEN_TO_BE_REPLACED

New York’s M2 Ultra Lounge hosted the lavish Diddy party, except that the drinks were virgin and most of the guests were underage. Justin couldn’t be happier as musical guests such as Trey Songz, Jim Jones, Juelz Santana, and Fabolous brought the house down. The “prince” got a special present that night—a brand new luxury sedan that cost Diddy $360,000.

Daddy also gave his son a check for $10,000, which do-gooder Justin immediately donated to Wyclef Jean’s charity Yele Haiti. Not bad for a celebrity’s son.

And—you guessed it—the crew of MTV was there to document everything for a special episode of My Super Sweet 16. Check out the official party photos here. 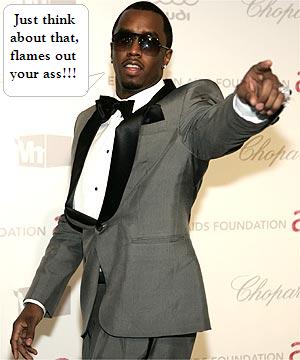 Grammy-winning rapper & somewhat anger-problem-child Sean “Diddy” Combs is apparently being sued by a gentleman who reveals that the hip-hopster hit him in the face while at a Hollywood nightclub last week. Ooops, that one’s gonna sting a bit I imagine, Diddy.

According to an attorney for Combs, Diddy has denied hitting anyone & said that the plaintiff, one 27-year-old Gerard Rechnitzer, just wants to cash in on Combs’ celebrity status. Sure, why not.

The suit was filed on Friday in an L.A. court. The lawsuit reveals that with provocation, Sean shouted at Rechnitzer, who then told his girlfriend that they should leave the club. At this point, Diddy apparently said, “I’ll smack flames out your ass!” Wow. Can he really do that? That is a feat I wouldn’t mind seeing outside a Hollywood nightclub, it beats seeing Paris Hilton’s uglies anyway.

After saying that bit about the flames & ass, Combes attacked the plaintiff which caused him to fly backwards several feet. No word on it flames actually exited his ass.

More news on this case as it comes. Poor Diddy, you just can’t be a rapper without a little anger, can you?