In just a few days, The Tooth Fairy will hit the cinemas. Dwayne “The Rock” Johnson plays the lead role, only this time he’s a minor league hockey player whose nickname comes from his mean habit of knocking off opposing players’ teeth.

He takes his bad guy image a step further by discouraging kids from pursuing their dreams. The mother of all tooth fairies, Julie Andrews, sentences him to one week of hard labor as—you guessed it—a real tooth fairy.

Hey, I’m all for magical fantasy-comedy movies. I was a kid once and I, too, was a sucker for these types of flicks. But excuse me while I snicker a bit at the hilarious fairy wings that Dwayne puts on.

Remember, he started out as a WWF wrestler. He succumbed to the glittering world of Hollywood movies when, other than cameos, he starred in blockbusters such as The Scorpion King and The Mummy Returns. He started softening up when he took on family-oriented movies such as Race to Witch Mountain and Get Smart.

Oh well, the 37-year-old retired wrestler refuses to be called “The Rock” anymore. “When a family film is done well, there’s a character that every member of the audience can relate to,” he said to USA Today in a dated interview. “I want to be one of those guys. I never wanted to be pigeonholed as the athlete who acted or the wrestler who did action movies.”

Dwayne “The Rock” Johnson went from this… 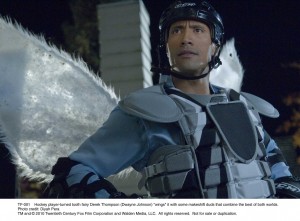