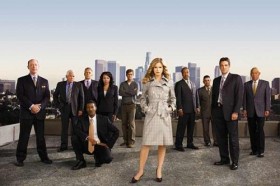 Kyra Sedgwick and her cast of criminal investigators will end their TNT run in 2011 when The Closer, closes it’s doors on Season 7.

The popular show is being canceled because Sedgwick, who has won numerous Emmy’s for her role on the show, has decided it was time to bow out.

There appears to be no hard feelings towards TNT or the show, with Sedgwick announcing:

“I cannot fathom how difficult it will be to say goodbye to the incredible family we’ve created on The Closer,” adding, “I will always be grateful to (series creator) James Duff for his love and friendship, as well as creating such a rich and complex character who I have loved living with year after year.”

Turner Entertainment Networks President Steve Koonin praised the show for setting the direction of TNT shows that have come about since:

“The Closer was a pivotal series in setting a new course for TNT’s original programming, while also serving as a prime example of the storytelling strength possible on cable television.”

The Closer was still receiving 8 million viewers per episode during the last season and is expected to do well into the final season.

In the meantime Sedgwick can laugh all the way to the bank as the show will hit the magic 100 episode syndication number that tends to mean big bucks for the shows actors.