It’s the ultimate 90’s fantasy… and will still remain as one.

END_OF_DOCUMENT_TOKEN_TO_BE_REPLACED

After announcing the engagement Bunton Tweeted:

END_OF_DOCUMENT_TOKEN_TO_BE_REPLACED

Victoria Beckham has announced that she will not be taking the stage with her former Spice Girls pals when they perform at the 2012 Olympics.

Interestingly enough, husband David Beckham had worked tirelessly to bring the Olympics to his homeland, however Beckham, who reunited with her Spice Girl friends in 2007 has said she’s simply not up to the task of performing. According to a snoop:

“There is no way Victoria will perform with the Spice Girls ever again. She’s not a spoilsport but she doesn’t feel she’s a good enough performer to go back there again all these years on.”

END_OF_DOCUMENT_TOKEN_TO_BE_REPLACED

The stripper, an employee of the Kings Cross strip club told The Daily Telgraph that they was invited back to the couples room by one of their bodyguards and had a “nice time” with teh couple.

“It was just one of those things I felt I should do because something like that might never happen again,” the stripper said, while adding, “I know that sounds kind of wrong. I wasn’t going to [go]… but they got one of their bodyguards to come up to me and ask me. So I did.”

END_OF_DOCUMENT_TOKEN_TO_BE_REPLACED 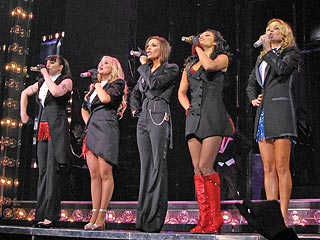 The Spice Girls have taken their final bow as a group at their last (and we hope they mean it this time) concert in Toronto. “Our time is up … we’ve come to the end of the road … there are tears of both sadness and joy. Look how far we’ve come!,” they said on their website.