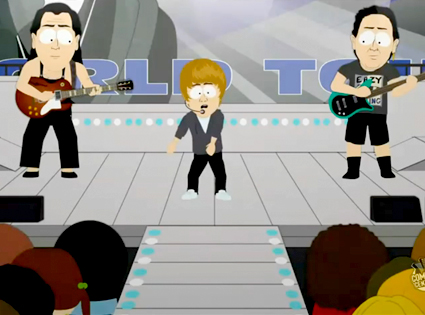 Kenny got the night off from being killed by Trey Parker and Matt Stone on the most recent episode of South Park, in his place was the death of Tween sensation Justin Bieber.

In the episode Cartman and Cthulhu (the dark lord) teamed up to get rid of everything evil, they started with Burning Man hippies and Whole foods, but then moved on to their “most challenging and most evil opponent,” Justin Bieber.

Cartman, dressed as “the Coon” said he had to kill Bieber “In order to save the Earth,” adding “this little butthole had to be stopped.”

Here’s a video from the episode:

END_OF_DOCUMENT_TOKEN_TO_BE_REPLACED

The world’s number one golfer, Tiger Woods, is the new target of animation sitcom South Park.