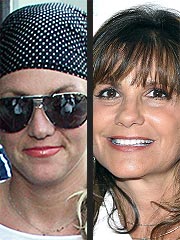 It’s so…normal. So…happy. And a little surreal. Don’t they hate each other? Britney didn’t even want her to go in her nouse, now she’s asking her whether or not that blue dress looks cute on her?

This is such a 180 degree turn around from last week’s events that we’re wondering what the HECK happened in that hospital. 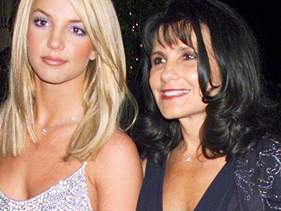 Britney Spears’ parents defends their decision to place a restraining order against Sam Lufti, saying that he had verbally abusing her and drugging her.

This was one reason Britney was in such a “chaotic” state when Lynne Spears found her the night they whisked her to the hospital. She was talking like a very young girl. “Britney picked up a bottle of pills and read part of the label and asked us, ‘What does insomnia mean?’ Sam told her the pills will help her stay awake.” She also kept changing her clothes and her dogs’ clothes “many times.”

Lynne says that Lufti had cut off Britney’s phone lines, confiscated her phone charges, and ground up pills and put it in her food. The medicines Risperdal (and anti psychotic drug) and Seroquel (used for bipolar disorder) had been one reason why Britney had been sleeping so much the last week. “[Lufti] told us that the doctor who is treating her now is trying to get her into a sleep-induced coma so that they could give her drugs to heal her brain.”

Lufti claims he’s the only one who cares about Britney. “I’m the one who spends 24/7 with your daughter. I sleep in cars outside her house so she can’t leave.” He told her parents, “If I weren’t in the house to give Britney her medicine, she would kill herself. If you try to get rid of me, she’ll be dead and I’ll piss on her grave.”

Lynne says that Lufti is hardly a friend, and that he often verbally abuses her. “Sam had told Britney that she was an unfit mother, a piece of trash and a whore, that she cares more about [paparazzo] Adnan [Ghalib], her current boyfriend, than she cares about her kids, and that she does not deserve the kids.” 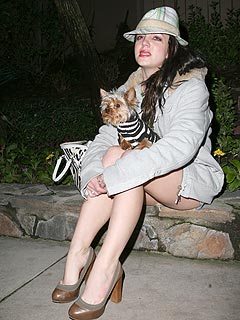 Weird day for Britney. Yes, even weirder than usual.

1. She fights with friend Sam Lufti in the car. Bolts out of the car, sits on the sidewalk with her dog.

3. Adnan Ghalib shows up at her gate. He’s turned away.
4. Adnan shows text messages to other paparazzi, where Sam Lufti called him a “manic trigger” and warned him that “any more contact will kill her.”
5. Britney’s mom shows up for a visit.
6. Britney abruptly leaves the mansion. Gets into the car with Adnan.
7. Car breaks down. They go back home. Mom still waiting.
8. Adnan leaves and Britney and Lynne hang out until 1:30 am, till she drives her to Longs Drugs in Studio City.