Less than a year after cheating on Sandra Bullock, Jesse James has announced his engagement to current girlfriend Kat Von D.

Kat Von D and Jesse James have been official since September and have been spotted all over the country in each others arms.

James told PEOPLE on Thursday that his fiance is:

“An amazing woman who stood behind me when the world turned their backs.”

END_OF_DOCUMENT_TOKEN_TO_BE_REPLACED 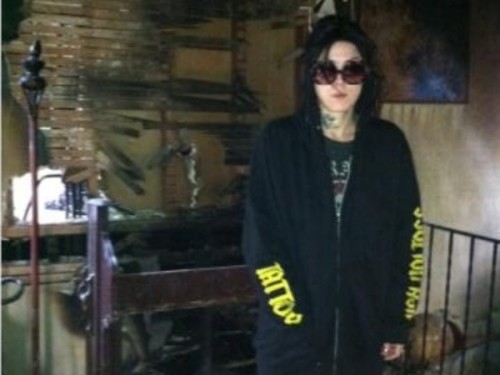 Kat Von D of L.A. Ink fame watched her home go up in smoke on Sunday at approximately 11:23PM. Firecrews responded to a 911 call, unfortunately her cat Valentine perished in the fire.

Von D tweeted after the incident:

“My house burned down last night with my cat inside,” while adding, “R.I.P. My little Valentine….In order to gain everything, you must lose everything.”

END_OF_DOCUMENT_TOKEN_TO_BE_REPLACED

Jesse James is quite the catch, at least Kat Von D seems to think so. But honestly, what isn’t there to love, he’s a serial cheating ex-husband with a love for tattooed strippers, drugs and Nazi’s.

Apparently the LA Ink star is “in love” with James who she has been spotted with in public on numerous occasions since Sandra Bullock sent him packing.

“Jesse is only my ninth boyfriend. I don’t hang out with anybody unless I am in love.” END_OF_DOCUMENT_TOKEN_TO_BE_REPLACED

Could Kat Von D and Jesse James be more than just friends? That’s the news coming out of  TMZ after the two were spotted around Las Vegas together this past weekend.

D and James were spotted being all “touchy-feely” at the Mandalay Bay hotel, then having a romantic dinner at N9Ne Steakhouse at The Palms.

The two then stayed at yet another very high end Vegas hotel.

According to Von D’s people, they are “just friends” while other sources are calling them “friends with benefits.”