Sounds like a scene from a Hollywood movie: police rush into a warehouse, seizing boxes of weapons, and saving innocent citizens from death and dismemberment (cut to high-speed chase, loud sirens, and a slow-mo of the bad guys escorted to the car).
But it’s not a movie—not yet, at least. This all happened on the set of the zombie movie World War Z. Hungarian police swooped down and took away more than 80 automatic weapons, including some bad-ass AK-47s and sniper rifles.

Why? Become some idiot in procurement got guns that had live ammo. “They were not as fully inoperable as they were supposed to be,” said Hungarian authorities.

Which would’ve made it really difficult to do a take two, don’t you think?

So the cops have saved the day, and Brad Pitt is safe and sound, with every strand of his long, sometimes greasy-looking, but nevertheless sexy hair intact. Millions of women around the world are breathing a sigh of relief. Oh, and Angelina Jolie, too. Let’s not forget her.

Moral of the story: don’t put live bullets in big guns. But then any idiot would’ve known that. What are they teaching these Hollywood interns now, anyway? 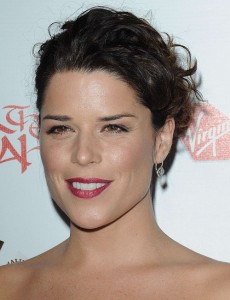 It’s confirmed – Neve Campbell will be returning as the lead star in the fourth installment of horror movie franchise, Scream. She’s going to be filming soon, together with some original cast members such as David Arquette and Courtney Cox. They’re all many years older, let’s see how this one turns out, shall we?