In a new twist on monetizing the now already 27′ long fame of Miley Cyrus some smart guys in the UK, who clearly were wearing online glasses, looking at dollar signs on their screen, now risked to get sued.

Sued by Miley Cyrus. Over a doll of the teen celebrity.

Read that again: sued over a doll. By Miley Cyrus.

Isn’t she a cutie? Sorry, I got sidetracked for a second… or seventeen.

But the doll in case isn’t an ordinary Miley Cyrus doll, nor is the star wearing glasses, this doll has been flying of the shelves and was sold out within 48 hours according to a spokes person of Pipedream Products, the doll’s manufacturer. Sold out minus some which have been taken off the shelves for legal reasons. Legal reasons before adolescents and basement dwellers online could order it from Amazon, which sold it the doll for around $28 in the US. END_OF_DOCUMENT_TOKEN_TO_BE_REPLACED

Sure Miley Cyrus became a gazillionaire and Billy Ray Cyrus once again became a household name thanks to the hit Disney series Hannah Montana but now the one-time mullet wearing rocker is attacking the show for ruining his family life.

Billy told GQ Magazine in the March edition “The damn show destroyed my family” while adding that if he had a “Do-Over” card he would think twice about giving Miley her first chance at a star led career.

After making his proclamation Dr. Drew Pinsky spoke on The Joy Behar Show on Tuesday and had this to say about Disney destroying the family:

END_OF_DOCUMENT_TOKEN_TO_BE_REPLACED

She may just be Miley Cyrus’ biggest fan. We recently spotted the Hannah Montana star with her 10-year-old sister Noah as they headed off to a recording studio in Burbank, California.

It’s not about their adorable new dog, Mate, or Miley’s hot leather shorts that piqued my attention. It’s her little sister’s fashion sense! Doesn’t her wardrobe remind you a lot of Hannah Montana’s early days in Disney? It’s tween dressing at its best, especially if you have a popstar-actress for an older sister.

You already know that Hannah Montana is coming to an end, so what’s next for Miley Cyrus?

She always said she wanted to do more mature roles onscreen, so here’s her chance to prove that she can do something better than her bubblegum Disney acting.

The Last Song is another Nicholas Sparks book-turned-movie about a rebellious New York teenager who has to spend the summer with her estranged father, a concert pianist, in Tybee Island, Georgia. She slowly reconnects with her father through their mutual love for music. She meets a hot teenage guy and falls for him in the process. Watch the full trailer here:

I have not read this book, nor have I heard any spoilers about it. But if we’re using past Nicholas Sparks bestsellers as a basis, chances are, the movie will draw out your deepest emotions, after which it will completely crush your heart when one significant character is killed off in the end. Seriously, why does someone always have to die in a Nicholas Sparks book? Not in The Last Song, I hope.

Back to Miley. I have high hopes for her new flick, coming out in April. She reveals in the February cover story of Harper’s Bazaar that she’s still searching her soul and finding herself. That would’ve made a great motivation for the scenes in The Last Song. I’m keeping my fingers crossed.

Miley fans need not to worry; the 17-year-old popstar has a lot of projects to look forward to. She’s on Harper Bazaar’s February cover, where she talks about seeking more mature roles and still figuring out who she is. She’s also starring with Liam Hemsworth in her second flick, The Last Song, out this April. 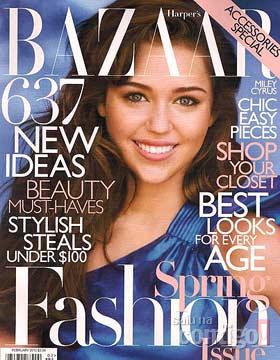 Do you think Miley’s career will still take off after the end of Hannah Montana?