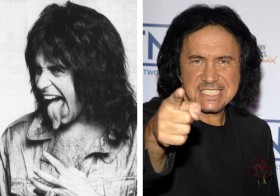 KISS bassist Gene Simmons is being targeted by hackers after the rock star said musicians should use legal remedies to fend off illegally downloaded music.

Both SimmonsRecords.com and GeneSimmons.com were targeted over the past weekend by a group that was angry he had stepped behind musicians instead of people who steal music owned by artists and their record companies.

Simmons had told the Telegraph:

“Be litigious. Sue everybody. Take their homes, their cars. Don’t let anybody cross that line.”