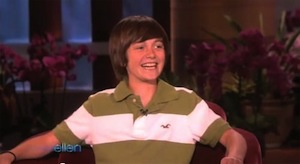 So Ellen DeGeneres likes this 12 year-old kid Greyson Chance so much that she started her own record label and signed him on. Greyson is the young lad who covered Lady Gaga’s song Paparazzi — doing both piano and vocals. He even got a call from Ms Gaga herself while he was on Ellen’s show recently.

This kid is really talented, both as a singer and a pianist, and the young girls are already swooning over him. But what’s going to happen when his voice finally breaks in a couple of years (I think it’s already starting)? Still, if he maintains the vocal strength he already has and sticks to his vocal range, he’s going to have a long career ahead of him. Just watch a couple of his other videos and you can see his talent at work.

So kudos to Ellen for giving Grayson a leg up, and for already giving him a $10K check. What a generous gesture, putting your money where your mouth is to promote young talent. Bravo. Not sure if any other talk show host has ever done that. I guess it also doesn’t hurt that Madonna’s manager is one of the people representing him, and that Grayson’s video on YouTube has received nearly 21M views, so it’s already viral and Ellen has a marketing engine already in place.