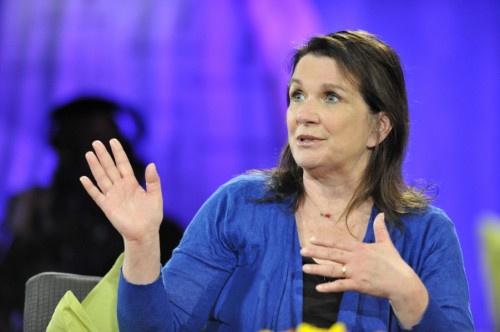 Elizabeth Edwards has lost her battle with Cancer at the age of 61.

The estranged wife of cheating husband John Edwards  had been in a fight with the disease for years, while at the same time becoming a best selling author and a champion of Cancer patients the world over.

It wasn’t until Monday that her rep let it be known to the public that her cancer had spread to her liver, making treatment for the diseases all but a loss cause.

Elizabeth is survived by four children and the following statement was released on their behalf:

“Today we have lost the comfort of Elizabeth’s presence but she remains the heart of this family,” while adding, “We love her and will never know anyone more inspiring or full of life.”

Elizabeth had been battling cancer since 2004 when she beat the disease, only to have it return in 2007 during John’s run for the Presidential office.

Before passing away, Edwards sent a final message to her Facebook followers:

“I have been sustained throughout my life by three saving graces my family, my friends, and a faith in the power of resilience and hope. These graces have carried me through difficult times and they have brought more joy to the good times than I ever could have imagined. The days of our lives, for all of us, are numbered. We know that.”

Our condolences go out to her family and friends.

It was her first TV interview since separating from husband John Edwards and Elizabeth Edwards opened up to Matt Lauer during a Today Show interview.

Edwards told Lauer that she is “not just a cuckolded wife”  and then talked about attacks against her character. She also spoke about her children and her battle against cancer and she comments on why she doesn’t speak ill of her ex-husband for her children’s sake.