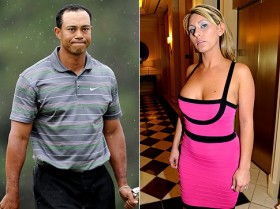 A recently discovered DNA test is pointing to a definitive no that Tiger Woods is not in fact the father of Devon James’ child.

TMZ found the DNA test courtesy of James’ mother, the test was taken in 2002 and shows another man, Pele Watkins is almost certainly (with 99.99% accuracy) the father of her child.

If that isn’t enough, Devon James received notification of the DNA test from her doctor’s office in 2002, which means she has known for 8 years that Tiger Woods is not the babies dad.