The fascinating thing about celebrities is that they’re just like you and me. They have bad breath in the morning, they possess odd quirks and fetishes, and they don’t really have magical powers like the characters they portray onscreen.

That’s why I enjoy reading cover interviews that peel off all the Hollywood layers to reveal the celebrity’s true self—or the closest possible reality. 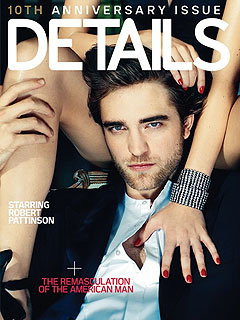 Details’ March issue did just that with heartthrob Robert Pattinson. Writer Jenny Lumet wrote what people are referring to as a TMI-interview with the 23-year-old actor.

The Twilight actor talks about his emotional connection with his dog, his grueling 12-hour cover shoot with Details, and not to mention, his fascination with body excretions and purring elephants.

The writer goes on by describing Robert in a way that keeps your attention beyond the usual fare of “he’s so hot” and “he’s so charming” that most Hollywood “it” boys showcase.

“Rob’s face is constantly busy—especially his kaleidoscopic eyes, which are continually rolling and dilating, because he is always thinking,” Jenny Lumet wrote. That was enough for me to keep my eyes glued on the article ‘til the last page.

How lucky (and fun) for her to see this side of an actor whom fans distortedly believe drinks human blood and has the strength of 100 superheroes.