END_OF_DOCUMENT_TOKEN_TO_BE_REPLACED

Jennifer Lopez is keeping mum, but these pictures say it all. Bradley was spotted in Los Angeles with a woman who looks eerily familiar. Oh come on, Jennifer, you think hiding behind your hands is enough? You know it’s you, and the fact that you’re ducking away from papparazzi only gives us more reason to wonder what’s going on. What are you guys trying to hide? Especially when both your reps refuse to give any comments.

Jennifer and Bradley have been hanging out for at least a month, when they were seen having dinner in New York. They said it was just for work—but we’ve heard that line before. And someone close to Jennifer has said that after that date in New York, the two “stayed in touch” and that she “ does like his attention, and it makes her feel good that he seems so into her.” There also seems to be a lot of chemistry between the two. “She has a fun time with Bradley and he makes her laugh.”

Well nothing to be ashamed of—after all, Jennifer Lopez is divorced, and there’s no law against her going out and having fun again!

Lauren Conrad may be very quiet on rumors that she’s dating Derek Hough, but… actions speak louder than words.

Just hours after she told press that she was happily, blissfully, and gloriously single, she was seen at a Hollywood hotel, hanging on (guess who?) Derek!

But Lauren still says that she’s still single, “and just having fun”—and apparently, she’s taking fun very, very seriously. She was seen partying with girlfriend Jamie-Lynn Sigler at the third annual Haunted Hayride kickoff event held at Griffith Park, and hours later, hanging out at the Hollywood Roosevelt Hotel with another group of friends. And guess who joined them? Derek Hough, with fellow Dancing with the Stars friend Mark Ballas.

The couple-that’s-not-a-couple went off on their own, holding hands, before riding off on a white pony into the sunset (okay, it was a white Mercedes, but you get the drift).

One of their friends shared our sentiments and said, “They are so cute together.”

Well, Lauren and Derek can go and have their fun together. Wink, wink. Nudge, nudge. 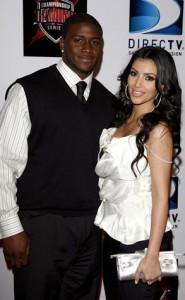 The other Kardashian sibling – the more popular one, I think – is back with her beau, Reggie Bush. They had been dating for two years when they took a break from each other. A source says that their time apart showed them that they couldn’t bear to be away from each other. Isn’t that sweet?