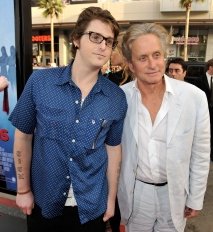 Cameron Douglas, son of Michael Douglas, has been handed a sentence of five years in prison and five years parole after pleading guilty to charges of posesson of heroin and conspiracy to distribute drugs. The charges carried a mandatory ten year prison term, but Douglas’ family rallied for the judge to consider leniency.

At the hearing, Douglas apologized to his family and friends and all who were affected by his actions. His mother, Diandra Douglas and father Michael were visibly shaken at the sentencing hearing.

The sentence was handed down just one day after a letter written by Michael Douglas was leaked to the press. The letter read, in part:

“I have some idea of the pressure of finding your own identity with a famous father,” Michael wrote. ” ‘‘I’m not sure I can comprehend it with two generations to deal with.”