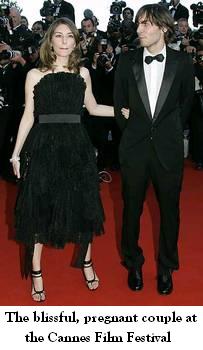 The new beau Thomas Mars is not widely known in the US, but his French pop-rock band Phoenix is hoping to spread their fame past Europe.Â  Sofia tried to give him a leg-up in the States by using his song Too Young for the soundtrack of her acclaimed Lost in Translation.

Sofia Coppola was married for four years toÂ Adaptation director Spike Jonze. The couple divorced in 2003 & had no children together.Â  You know I thought that would be the perfect marriage- two immenselyÂ inventive & intelligent directors living a life of love & creativity-driven bliss.Â  But I guess Sofia prefers a little more rock ‘n roll in her life.