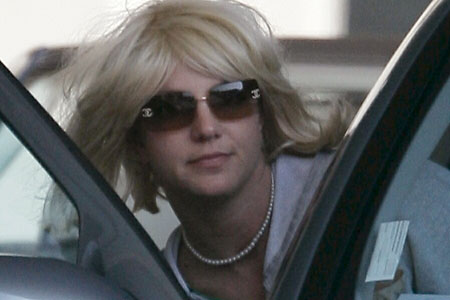 Spears is still rehabbing it up at the Promises rehab center in Malibu, but it looks like rehabilitation may not be on Brit’s mind.Â Â Allegedly,Â Spears attemped suicide twice this weekend because she wasÂ terrified that she would lose custody of her two young sons to estranged husband Kevin Federline.

Yeah,Â like that makes a whole lott of sense.Â  You may lose custody, so you might as well kill yourself so your kids never see you again.Â  Great logic there Britney.Â  Anyhoo, I doubt these rumors are even true, but with no Anna Nicole Smith around anymore we all have toÂ talk about something,Â right?

According to theÂ National Enquirer, Britney was so overwhelmed with what is going on, she just gave up & tried to kill herself two times this weekend.

On one occasion, Spears is reported to have tried walking into traffic so that she might be creamed to her death by a passing Volvo, but was rescued by an unidentified member of her staff just in time.

Only a short time after the walking in traffic incident, Spears was reportedly rushed to a hospital after overdosing onÂ Xanax tablets in yet another suicide attempt.Â  Well, if you don’t succeed once, try, try, try again.Â

Who knows if these rumors are even true, but knowing Britney Spears, we haven’t heard the last of this & I think this even further reveals that a healthy Brit is a long way off.Â  What do you think?